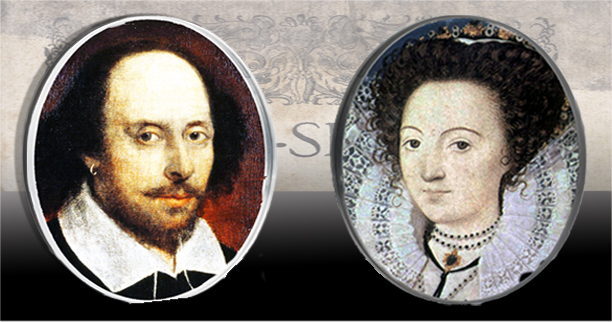 A little background: The Dark Lady was one of the great loves of William’s life – and by being the focus of 27 of his sonnets, he made her immortal.

Who was she? No one really knows, but one of the leading contenders is Amelia Lanyer. Amelia herself has an interesting story. She is regarded by many scholars as the first published woman poet in the English language – and a proto-feminist. In her major work “Salve Deus Rex Judaeorum,” she blames the Fall from Paradise squarely on Adam’s shoulders, not Eve’s.

Amelia Bassano was born in 1569. Her father, Baptista Bassano, was a musician brought to England from Venice along with his brothers to enhance the music of the royal court. The Bassano family may have been originally Jewish of Moroccan descent – thus “the “darkness” of our Lady. After her father's death, her story becomes convoluted, but she is well-raised and educated. Probably after her mother’s death, Amelia became the mistress of the much older Lord Chamberlain, Henry Cary, Lord Hunsdon, Queen Elizabeth’s cousin. When Amelia became pregnant by Hunsdon in 1592, she is married to a musician cousin, Alfonso Lanyer and gives birth to a son.

So it is likely she was a young and exotic beauty – with a talent for both words and music – at the court of Elizabeth, just at the time when Shakespeare first appears circa 1594. So it would be fun to imagine that if William and Amelia were young lovers, how much did sleeping with the man who will become the greatest master of the English language influence her to become a writer in her own right.

Now let’s jump forward another 15 years. It is 1609. Amelia wanders into a bookshop and finds a newly released book of sonnets of the now famous William Shakespeare. She opens the volume to discover that her ex-lover has devoted 27 sonnets (the largest portion of the volume) to their relationship. While the first few sonnets are romantically star-struck, the last 20 or so are tales of pure misery, self-doubt – nasty, mean and pettily vindictive – albeit some of the greatest words ever penned to paper.

So what would Amelia’s response be? (Think tabloid exposé today.) That is where “The Dark Lady Reflections” come in. If you follow the link you will see that the “Reflections” are divided into two columns. Shakespeare's sonnets appear on the left. Amelia's stream-of-conscious responses – her internal dialogues about each sonnet - appear on the right. In the center, apropos selections of Lanier's poetry are inserted, perhaps acting as a bridge.(On mobile platforms everything will be vertical – one section following the other.)

The Reflections cover a range of contradictory feelings, thoughts and insights (much like the sonnets).   Some are a matter of fact, some angry and resentful. Others poetic and philosophical. The work briefly explores her background and put forth a rationale how born Jewish she becomes such an ardent feminist Christian. While The Reflections begin in a matter-of-fact style, they progress, becoming darker, more intense and rhapsodic. The work end with a sensual, erotic reverie to parallel the highly charged eroticism of Lanyer's writing on her relationship with Christ. Also included are two poems. The Prologue, The Serpent's Bite, parallels Lanyer's "Eve's Apologie". The Epilogue , Cupid's Fall, parallels the last two Sonnets.

Working on this project forced me to delve into each sonnet, taking the time to understand the depth of thought, language and feelings expressed. That any one person could say so much, delve into the human condition so thoroughly, and at the same time use these joys and sorrows to explore the most universal of ideas and principles, while wrapping it all into 14 lines of perfect iambic pentameter, every single time – all done with the very same words that we use and jumble every day of our more mortal lives – leaves one humbled and awed.